Made by the drow, this rod is a magic weapon that ends in three rubbery tentacles. While holding the rod, you can use an action to direct each tentacle to attack a creature you can see within 15 feet of you. Each tentacle makes a melee attack roll with a +9 bonus. On a hit, the tentacle deals 1d6 bludgeoning damage. If you hit a target with all three tentacles, it must make a DC 15 Constitution saving throw. On a failure, the creature’s speed is halved, it has disadvantage on Dexterity saving throws, and it can’t use reactions for 1 minute. 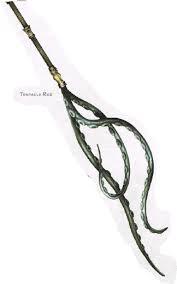