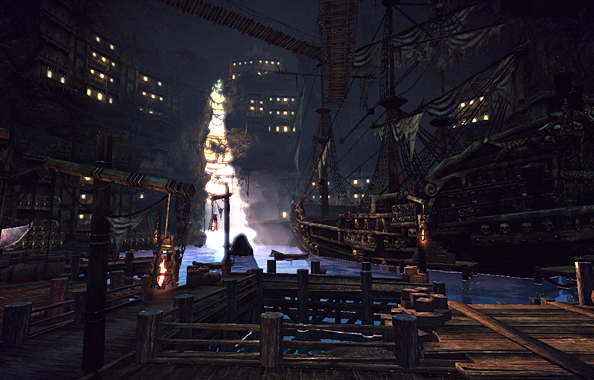 Once inside Skullport, the party sees several men dressed in prismatic robes standing on opposing plateaus surrounding the ship. Their hands rise as if greeting the arrival of the ship. After a moment the ship slows and lurches forward and side to side as it settles upon the now suddenly rising water. The robed figures seem to be controlling the elevation of the water, locks, waterways and guide the ship through various channels until the ship arrives at Skull Island docks. Along the docks, various races of humanoids scamper to and fro, carrying cargo and escorting prisoners. Drow, humans and duergar intermix and everyone seems to be intent on performing their tasks with accuracy and with haste. 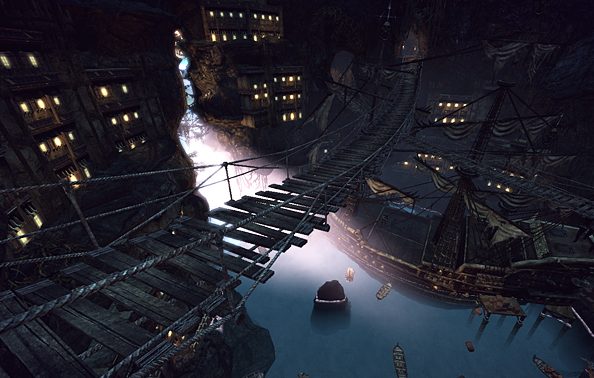 As your gaze rises to the boardwalks and decks above you see why the creatures below might be moving with purpose. A lank inky attired illithid (Xanier’ous) threatens over the balcony, its garment creeping along the planks as if they have a mind and purpose of their own. Protruding from its drawn hood are several tentacles that snake beneath its inspecting eyes. As your ship approaches the dock the illithid turns and fixates on your ship and crew. You notice a hidden mass behind the illithid lurking under the cover of an enormous joist that holds up an overhanging roof. The mass seems to float behind the illithid and repositions to his side as he moves closer to the ships location. As the mass (Silirink) emerges from the shadows cast down from the Gloam, you see a gigantic sphere with a large eye at its center. The eye is now drawing down upon the ship. Several eye stalks keep their gaze on the boardwalk below, ever scanning the traffic and goings on. It is then that you notice several other smaller orbs floating nearby, moving in an out of the buildings, floating up and down steps and moving around in what seems to be random patterns without purpose.

To Skullport (The City of Skullport)

To Skullport (Shore of Silt Island)